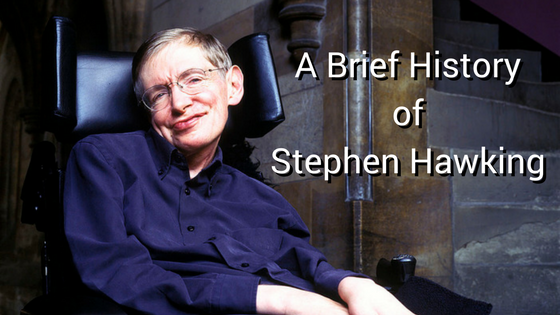 On March 14th, 2018, we lost one of the greatest scientific minds of all time with the passing of Stephen Hawking. We’d like to take a moment to reflect back on the life of this amazing man and his remarkable impact on, not just the world of science, but on the community of persons with disabilities and special needs everywhere.

There are many articles that have recently been published that rightly focus on his scientific contributions and you should most certainly give them a read, but as an organization that primarily serves people with disabilities, we would like to take a different approach. We’d like to focus on how his contributions served to undermine stereotypes and other preconceptions are often attributed to people with disabilities and special needs. At the age of 21, Hawking was diagnosed with a rare, early-onset, slow-progressing form of motor neuron disease more commonly known as ALS (amyotrophic lateral sclerosis) or Lou Gehrig’s disease. Overtime, Hawking’s physical ability level deteriorated and began to use a wheelchair for movement. He then lost the ability to speak and found himself using an electronic communication device which produced his now iconic digital voice.

Stephen Hawking became the one of primary examples people point to when reaffirming the old-adage “you should never judge a book by its cover.” People were flabbergasted, seeing someone with such a visually obvious, profound level of disability also wielding one of the most formidable intellects on the planet (and perhaps beyond). This is as a result of the low expectations people hold for individuals who have a visible disability. Stephen Hawking helped break that preconception and showed us all that no-matter how an individual may look, sound, or access the world around them, they should never be underestimated.

As intelligent and fiercely independent as Dr. Hawking was, the realities of his physical deterioration necessitated assistance to execute daily living activities. He also experienced medical difficulties which affected his health and wellbeing, requiring him to receive round-the-clock care from hired nurses. Without this support, the mysteries of the universe would have been the least of Hawking’s concerns. In the later years of his life, Hawking became a fierce advocate for the UK’s National Health Service (NHS), which he lauded declaring, “I have received a large amount of high-quality treatment without which I would not have survived.”

Had Hawking not been able to continue his work, who knows how long scientists would have had to toil to unlock the secrets of quantum physics, about which he wrote extensive, ground-breaking novels and scientific papers. Instead, with the support of his family, his caregivers, and the NHS, he was able to become a world-renowned scientist, best-selling author, and role-model to people both with and without disabilities. This underlines the importance of keeping our own Medicaid funding robust so that service organizations (like Easterseals) can continue to provide the essential supports they deliver daily.

Stephen Hawking never sought to change the way the public views people with disabilities, yet he had an undeniable impact on public perception of this global community. His primary contribution will be in the field of cosmology as one of the greatest scientists to study the stars. Still, to ignore his disability would be a grave error when considering the full range of his influence.

Not every person with a disability will go on to accomplish what Hawking had (nor anyone without a disability), but that’s not the point. The point is that everyone deserves a chance to pave their own way and make their own mark. This is why we need to dedicate ourselves removing barriers and supporting people with disabilities and special needs as they pursue their goals.

Thank you, Dr. Hawking – you will be missed and always remembered.

2 thoughts on “A Brief History of Stephen Hawking”